On this day in 1963 Roy Orbison and The Beatles played a show together in Birmingham, England.

This tour would spark lifelong friendships between Orbison and The Beatles- Paul McCartney, John Lennon, Ringo Starr, and George Harrison.  Orbison and Harrison would even go on to form The Traveling Wilburys together and work on each other’s solo albums such as Harrison’s Cloud Nine and Orbison’s Mystery Girl.

From the Orbison Archives, here’s a ticket stub from the show in Birmingham, UK 51 years ago today- 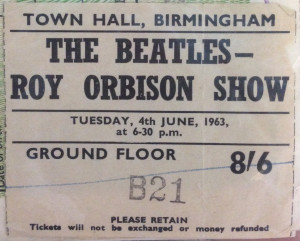