“On December 6, 1988, Roy Kelton Orbison passed away suddenly from a heart attack.

Death, as it so often does, left his plans unfinished: with a return ticket to Paris to rendezvous with wife Barbara Orbison for a second honeymoon, that Barbara had cleverly hidden under the guise of a ‘press tour;’ with plans to rehearse with his band for the Mystery Girl World Tour in 1989; and with plans to continue writing and recording in the studio with friends for a follow-up to Mystery Girl, and perhaps another album or tour with the Traveling Wilburys.

Roy left plans to live and love, plans for more music, and plans to reward himself with a new corvette, which was, THE ORBISON WAY.” 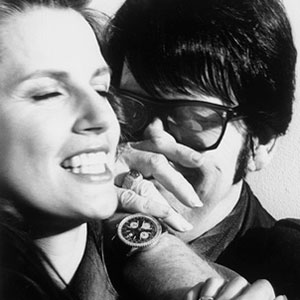 Exactly 23 years to the day, Roy’s very own Mystery Girl- his wife Barbara, passed away on December 6, 2011.