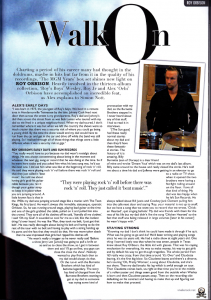 “It was really amazing to me to see how hard he was working,” says Alex Orbison

In the fall of 1964 Roy Orbison was at the top of the charts on both sides of the Atlantic with “Pretty Woman,” a gem of a hit punctuated by a seductive growl that rivaled Tony the Tiger and the MGM lion. In addition to that multi-million-seller, Orbison recorded a series of smashes for Monument Records (his first major deal was with Sun Records), from “Dream Baby (How Long Must I Dream)” and “Running Scared” to the oft-covered “Crying” and many others. After the success of “Pretty Woman,” he secured a lucrative deal with (perhaps a bit ironically) MGM Records. Rather than the roaring success they should have been, however, Orbison’s MGM years were fraught with disappointment and tragedy.