New Roy Orbison Exhibit at the Musicians Hall of Fame in Nashville!

The NEW Roy Orbison “OH, PRETTY WOMAN” themed exhibit opened last night at the Musicians Hall of Fame & Museum in Nashville!  Several of the people who were part of the recording of that iconic song were in attendance.

Here’s a sneak peek at the fantastic exhibit featuring items from deep within the Orbison vault. 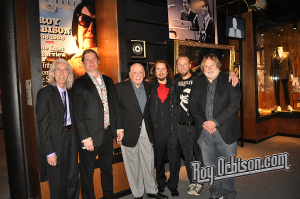