Chris Isaak performed “Oh, Pretty Woman” and presenting the award to the Orbisons at the event after opening the evening with a performance of “Only The Lonely.”  Isaak was a friend of both Roy and Barbara Orbison, Roy’s widow and late mother of Roy Orbison, Jr. and Alex Orbison. Earlier that evening he commented, “Roy Orbison has been my idol since I was a kid. When I met Roy years later we hit it off right away. He was just a great guy.  It makes it a pleasure to be part of the folks honoring his work because I believe every nice thing I’m saying.” Wayne Moss who played on the “Oh, Pretty Woman” recording session with Orbison on August 1, 1964 joined Isaak on stage for a rousing performance of the song with its certified iconic riff.  Musicians Hall of Fame and Museum founder Joe Chambers told the Nashville Scene that the “Oh Pretty Woman” riff “gets your blood going from the very beginning,” adding, “It’s one of those things, you hear it once and you remember it.”

Roy Orbison began making his mark on the music world in 1956 while recording for Sun Records, which boasted a roster of unparalleled talent that also included Elvis Presley, Jerry Lee Lewis, and Johnny Cash.  However, it was during his years on Monument Records in the early-to-mid 1960s when Orbison’s commercial success reached stratospheric levels, the apex of which was “Oh, Pretty Woman,” a song he co-wrote with Bill Dees.  It went on to sell 7 million copies, spent three weeks at No. 1 on the Billboard chart, and also topped the British charts for three weeks, as well.  It was unprecedented for any American to have this kind of chart-topping power simultaneously on both sides of the Atlantic in the Beatles-dominated year of 1964.

While Roy Orbison, who is already in the Rock and Roll Hall of Fame and the Songwriters Hall of Fame, is acknowledged to have one of the most uniquely beautiful and haunting voices in popular music, the MHOF honor recognizes the unmistakable riff that kicks off “Oh, Pretty Woman.”  It remains a truly iconic and timeless refrain, evidenced by the innumerable cover versions of the song by artists as diverse as Al Green, John Mellencamp, Johnny Rivers, Bon Jovi, Green Day, and Van Halen, the latter of which achieved a sizeable hit with their own 1982 version, showcasing the guitar theatrics of group leader Eddie Van Halen.  The song inspired the title of and is heard on the soundtrack from Pretty Woman, the blockbuster film starring Julia Roberts and Richard Gere. 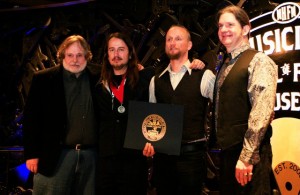