Lucky, Lefty, Nelson, Otis and Charlie T, Jr – together, they were known as The Traveling Wilburys… but who was really behind the curly hair and shades?

One obfuscating legend claimed they were “the only known surviving members of this once great tribe of wandering musicians”, with an ancestry that “goes back so far that their exact origins have become extremely difficult to… separate from the legends and myths that have grown around them.” 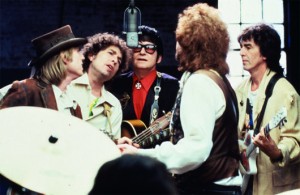