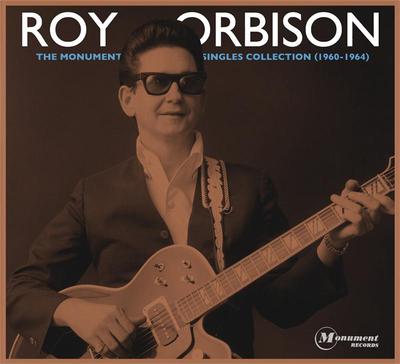 Celebrating the 75th birthday year of Roy Orbison with the Roy Orbison: The Monument Singles Collection.

A 2 CD/1 DVD set including all the A&B sides recorded by Roy Orbison for the groundbreaking Monument label during an electrifying peak from 1959-1966. Restored to pristine mono mixes for the first time since their original 7″ vinyl releases, Roy Orbison: The Monument Singles Collection presents The Big O’s core classic catalog the way it’s meant to sound.plus the first-ever DVD release of Orbison performing nine songs from “The Monument Concert 1965.”

Roy Orbison signed with the newly emerging independent label Monument Records in mid-1959. Orbison’s third single for the label, “Only The Lonely (Know How I Feel),” which announced to the world the true artistry of Roy Orbison. The song peaked at #2 on the Billboard Pop Singles chart and rocketed up to #1 on the UK charts.Orbison followed up the breakthrough with a pair of respectfully charting singles before knocking it out of the park with “Running Scared,” his first US #1. After that came an unbroken four-year string of Top 40 hits during which Roy Orbison became America ‘s top-selling recording artist and one of the world’s most celebrated entertainers.

Roy Orbison was one of the few established hit-makers from the late 1950s and early 1960s to not only hold his ground, but to actually increase his popularity in the wake of the British Invasion. He maintained his popularity through music which displayed an extraordinary variety of content, structure, tempo and rhythm and an authentic emotional connection that transcended mere craft, exemplified in his signature classic, “Oh Pretty Woman,” recorded on August 1st, 1964. Written by Orbison with his new writing partner Bill Dees, “Oh Pretty Woman” became Roy ‘s biggest hit and is one of the most immediately recognized and popular rock songs of all time. Released in August 1964 in the US and in September of that year in the UK , the song hit the #1 slot in virtually every country in the world where people had record players, selling some seven million copies that year.